During the Olympics poet Elizabeth Bachinsky and I have conducted a public art project called BLACKOUT AT THE CANDAHAR, asking members of the public to black out sections of Olympics coverage to create erasure poems. We have collected over 300 hilarious, confrontational and/or elliptical refractive miniatures of the media overwhelm that is and was the Vancouver 2010 Olympics.

Thanks to The Candahar‘s curators, writer Michael Turner and Reid Shier of Presentation House and artist Theo Sims, for the use of The Candahar as our project space and for their support of the BLACKOUT project. Thanks to everyone who made a poem; our contributors were of all ages and were from Vancouver and away. In the midst of the Olympics mania here, it was great to witness the eagerness of the public to respond critically to the media representation of the Games.

Here are three contributions. One is authored by myself, but I won’t tell you which one. The dashes represent where text was blacked out.

1)Surreal Believe, A Profile of Olympics Torchbearer Cora Renaud
“human/flame/the best prepared/
she’s been/the flame/for the past month or so–/
her flame on the sides of transit buses/
become real — no props –/
the authentic/flame/
along the Sea to Sky Highway/
well-wishers cheering her on.
Renaud,/
is/
the flame/ — the poster girl/
She was received/selected/Canadian,/awesome
to be/the torch./
‘Isn’t that cool?’
I’d love to/surreal/believe.” 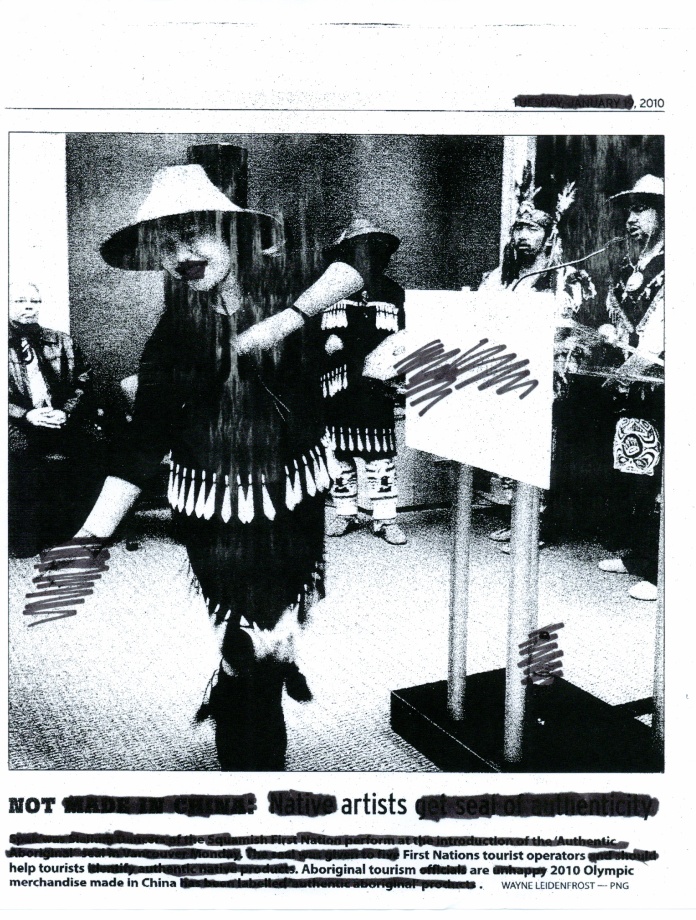 3 thoughts on “The BLACKOUT’s closing ceremonies and three poems”